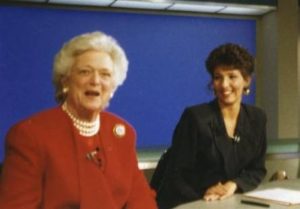 Those of you who know me best, also know that I am far from being a fan of politics. Now and then, however, a few sage tidbits pique my interest. For example, as you likely know, Barbara Bush and Abigail Adams have the distinction of being the only two women to be married to a U.S. President and be the mother of another U.S. President. Barbara Bush was married to George H.W. Bush, the 41st U.S. President, and was the mother of George W. Bush, the 43rd U.S. President. Anyone who met Barbara Bush loved her and her ability to relate to anyone with the utmost honesty and wit. I was blessed to meet and interview her several times, including when she gave the commencement address at Wellesley College in Massachusetts on June 1, 1990. Always a powerful advocate for children and families, she offered up plenty of sage words for the graduates, including this tidbit.

“We have too many high-sounding words, and too few actions that correspond with them.”

Author of 20+ books, and counting! A professional voice-over artist, dedicated foodie, and lifelong corporate communications geek, Cathy Burnham Martin has enjoyed a highly eclectic career, ranging from the arts and journalism to finance, telecommunications, and publishing. Along with her husband, Ron Martin, she has passions for entertaining, gardening, volunteering, active and visual arts, GREAT food, and traveling. Cathy often says, "I believe that we all should live with as much contagious enthusiasm as possible... Whether we're with friends or family, taking people along for the ride is more than half the fun."
View all posts by Cathy Burnham Martin →
This entry was posted in Notable Quotables, Uncategorized. Bookmark the permalink.