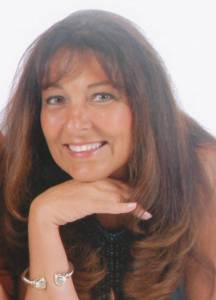 An award-winning author now, Cathy Burnham Martin’s first recognized attempt at writing happened in 5th Grade, when an early poem landed in the Goffstown News.  That was back when her parents refused to let her have the then-popular Chatty Cathy doll, stating that one chatty Cathy in the house was more than enough.  Though poetry took a back seat, she has since driven her writing and blabbing proficiencies along a highly eclectic career path through recruiting, acting, marketing, broadcasting, and bank organizing.

This professional voiceover artist, journalist, corporate communications geek, and dedicated foodie earned numerous awards as a television news anchor.  She acknowledges that her broadcasting skills enjoyed extremely humble beginnings, as she often appeared in the rows of children watching cartoons and playing games like “Name the States” and “Simon Says” on WMUR-TV’s “Uncle Gus Show.”  As an adult, she has written, produced, and hosted dozens of groundbreaking documentaries, TV specials, and news reports, ranging from the Moscow Super Power Summit and the opening of the Berlin Wall to extensive coverage of New Hampshire’s First-in-the-Nation Presidential Primaries.

A born storyteller, Cathy showed questionable promise as she made up ghost and crime stories for weekly elementary school “Show & Tell” sessions, including one that sounded so real that local police were summoned to interview the imaginative first grader.  Such antics led to her first acting role, when she proudly played Peter Rabbit in a neighborhood production.  It turns out she got the role because the older children wanted to avoid being the kid who’d get spanked for tearing their shorts while escaping under the farmer’s wire fence in every performance.  She landed future roles more admirably and remains a member of the Actors Equity Association, media coach, and business speaker, including status as a 20-year Professional Member of the National Speakers Association since 1995.  Cathy Burnham Martin has been dubbed “The Morale Booster.”

In her early educational path, she frequently arose as a class clown and a challenge for her teachers.  At their retirement celebration, her team of kindergarten teachers announced that Cathy had been both the most creative and the most challenging student in their 30-year career.  A perfect twist of fate has found Cathy enjoying adjunct college faculty work, teaching persuasive public speaking and communications.  She proved to be a much better-behaved student when she earned a Master of Science in Corporate and Organizational Communications at Northeastern University in 2009, where she also received the highest academic honors award.

Her parents’ insistence on extensive involvement in the community invited the volunteerism bug to bite her, and Cathy has actively served on boards for corporations and non-profits, including both Easter Seals for both New Hampshire and New York, and the Manchester Community Music School.  Cathy Burnham Martin was also the 2009 recipient of Easter Seals’ David P. Goodwin Lifetime Commitment Award.

Though her father once trained under the executive chef at Boston’s famed Copley Plaza Hotel, and her mother quickly gained Best-Cook-In-Town status, Cathy admits that her own earliest recipe creations evolved out of laziness and a desire to use fewer ingredients and take less time.  Her passion for great tasting, yet simple cooking led to the celebrated KISS™ Keep It Super Simple original recipe cookbook series.

Cathy Burnham Martin narrates her own books as well as those of other authors.  Audiobooks can be found on such sites as Audible.com as well as Amazon and iTunes.  In addition to fiction and nonfiction books, Cathy writes articles for the GoodLiving123.com blog.  Other writing credits include 300+ episodes of New Hampshire Minutes, plus being a contributing author in various books, including:

2007 saw the release of Cathy Burnham Martin’s timeless book, Dog Days in the Life of The Miles-Mannered Man, a whimsically philosophical collection of tall tales, wagging tails, and tantalizing treats, from Quiet Thunder Publishing, a division of SpeakEasy Corporate Communications in Manchester, NH.

This was followed by a number of other books, also from Quiet Thunder Publishing, including:

“A Morale Booster Extraordinaire builds people’s confidence… providing ammo to use against both naysayers and inner demons.”