While visiting the island of Kauai, we stayed at the Marriott Waiohai Beach Club on the south shore in the Poipu Beach area.

The grounds are simply gorgeous… so much so that hubby says he wants to marry the landscaper and take them home.

A large koi pond was nestled beside the adults-only relaxation pool.

And there were two additional pools… a large primary swimming pool, plus a smaller one directly on the shore.

Outside our room was a lagoon with waterfalls all set amidst swaying palm trees with views of mountains and the Pacific Ocean, of course.

Your hammock awaits you! 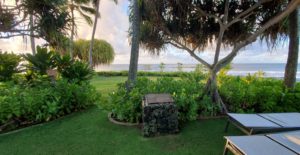 I was impressed to see that even resorts continue to protect and preserve sacred lands and temples. We had the remains of one such temple right beside a swimming pool.

This proved to be both an ideal location to watch the early morning surfers and catch the glorious sunrise.

Our “room” turned out to be a large apartment with two king bedrooms, two bathrooms, a full kitchen, a dining table for 8, a laundry, 3 wide-screen TVs, and a private lanai in the back. 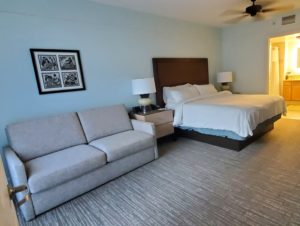 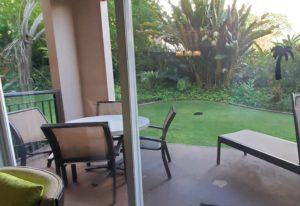 As our space was so enormous, Sir Ronald invited my sister, Deborah to stay with us during our visit to her island. This gave us super sister time! 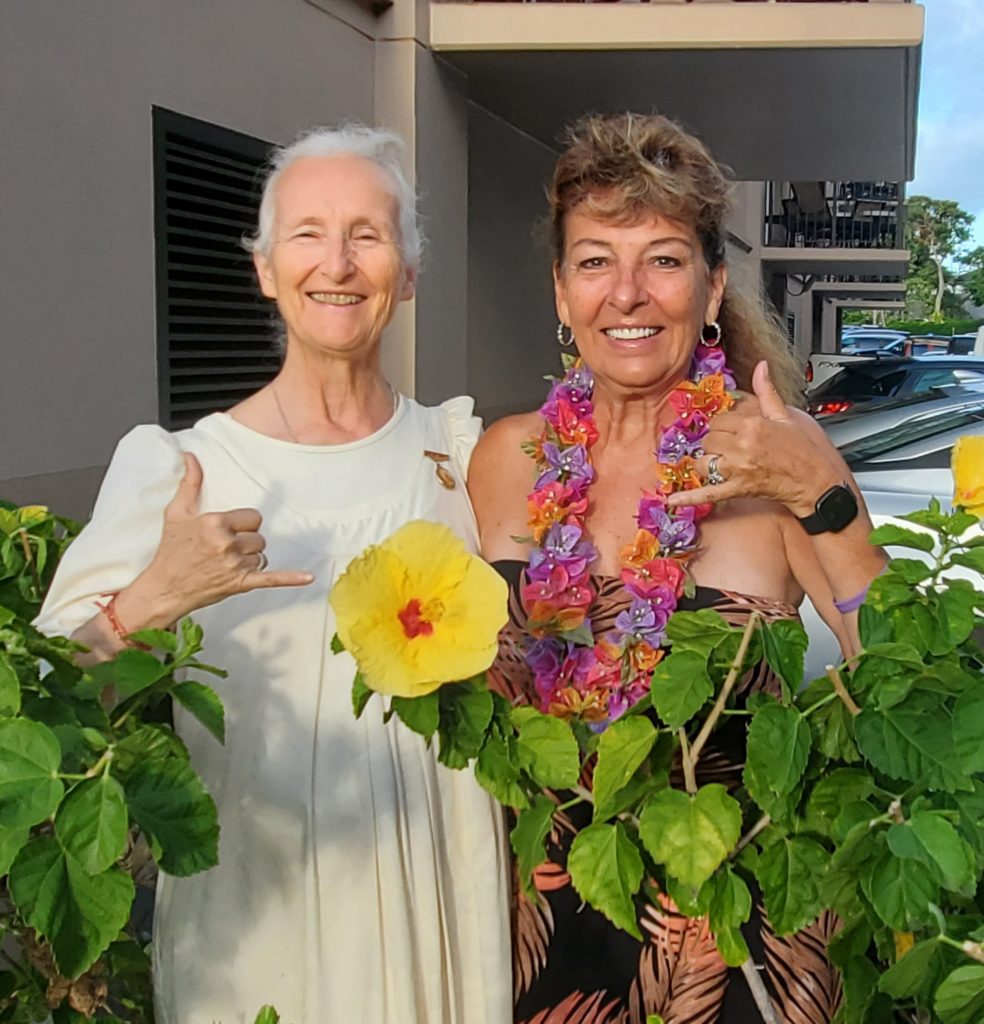 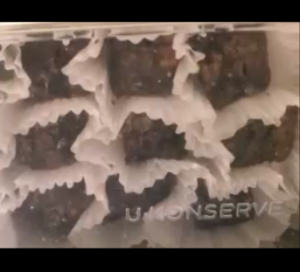 Naturally, we also continued enjoying many local foods. Deborah had made some Bruddah’s Ulu Bars. Totally vegan in her diet, these bars deliver a yummy treat with no flour… just ripe breadfruit, dates, bananas, ginger, cinnamon, and allspice.

Ulu is breadfruit. Quite common in Hawaii, ulu is a starchy carb like rice, corn, potatoes, and sweet potatoes. It originated in New Guinea and the Philippines. 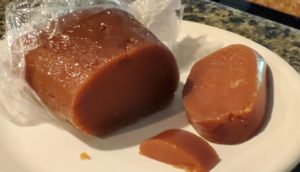 She also introduced us to Kulola, a sweet confection made from kalo (taro), waiu nu (coconut milk), and kopaa (sugar) by the Aloha Aina Poi Company in Waimea, Kauai. Kulola has a dense cranberry jelly-sort of texture, though finer. The flavor is reminiscent of fig, as in a Fig Newton cookie, but not as sweet and with no seeds. We sliced it and munched the yumminess atop crackers. 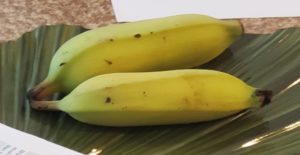 And she brought apple bananas, which look like the more familiar traditional bananas, except they are about half the size. 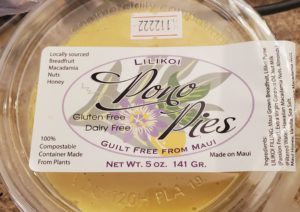 Plus, we gobbled up a yummy lilikoi (passion fruit) pie, with a crust made from breadfruit, macadamia nuts, almonds, honey, vanilla, and sea salt. 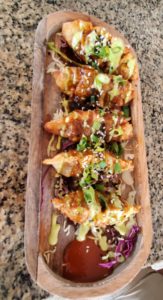 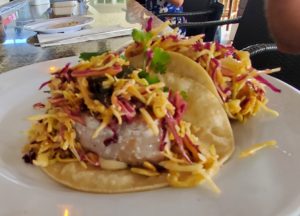 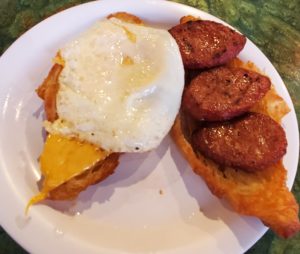 We also found that Portuguese sausage regularly replaces traditional breakfast sausage and even bacon. It was delicious on my giant grilled croissant sandwich with a fried egg and cheese. Portuguese sausage has been a staple in the Hawaiian Islands since the Europeans first settled here and started ranching in the early 1800s.

On an interesting side note… Hawaii was the first state in which McDonald’s varied its menu to suit cultural diversity. Even back in the 1970s, they offered both Portuguese sausage and poi. 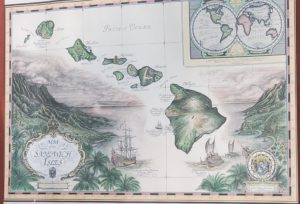 The first European to set foot in Hawaii was Captain Cook back in 1778 when he came ashore at Waimea Bay on Kauai. What we now know as Hawaii, he named the Sandwich Islands, after the Earl of Sandwich.

There’s no escaping history here, which I greatly enjoyed as the rich culture is so deeply diverse. For instance, just off the coast of Kaua’i is a large island of which I was totally unaware.

Ni’ihau in distance across the water from our hotel

Ni‘ihau is the westernmost and 7th largest inhabited island in Hawaii. 17 miles southwest of Kaua’i, it contains 69 square miles. It is owned by Bruce and Keith Robinson, descendants of Elizabeth McHutchison Sinclair Robinson. She purchased Ni’ihau in 1864 from the Kingdom of Hawaii for $10,000, or about $175,000 today.

Elizabeth McHutchison, born in Scotland in 1800, married sea Captain Sinclair in New Zealand and bore 13 children. He was later lost at sea with their eldest son. Looking for a fresh start, she moved the entire family to Vancouver, Canada, and then California in the U.S. Not caring for either location, she moved everyone to Hawaii, where the King found her a fascinating person. Because her late husband had always fancied having an island of his own, she purchased Ni’ihau in 1863 when the King offered it, but that was only after turning down sites including the Waikiki area and Pearl Harbor on Oahu and Kapa’a on Kauai’s east side. She remarried, became a Robinson, and had 3 more children. Cattle ranching was the initial activity, but due to the island’s arid conditions, this became too difficult. Fishing is the primary activity now.

In 1915, Ni’ihau became closed to outsiders, reflecting the Robinson family’s dedication to preserve Hawaiian culture and tradition. People must be truly 100% native Hawaiians to live there. Truly “The Forbidden Island,” Ni’ihua is off limits to all outsiders, except for the Robinson family and their relatives, as well as U.S. Navy personnel, government officials, and invited guests. The residents speak only the Hawaiian language. Transportation on the island is by horse or bicycle. There is no modernization, which means, no telephones, television, radio, nor computers… no indoor plumbing, refrigeration, nor electricity. Anyone traveling to Kauai or anywhere else can return as long as they did not drink alcohol, smoke cigarettes, or gamble. Thus, the population has dropped from 700 in 1915 to just 30 in 2022.

The natives make a gemlike shell lei, called lei pūpū. A single lei can sell for thousands of dollars. The one in the photo (not my photo) is a genuine Ni’ihau lei pūpū necklace, for sale on eBay for a cool $32,000. Yikes! Hawaii protects this native trade by laws that require all shells to come from Ni’ihau, and the jewelry must be made entirely in Hawaii.

For Hawaiian natives, including those of many mixed cultures, children are still raised by grandparents, because the parents work all day. Specifically, your tutu, or maternal grandmother is the one who is most responsible for raising the children. As our Hawaiian guide, Kana’e explained, “She is the one you know is your grandmother. Hawaiians did not have a society where there was one man and one woman in a marriage. A woman could have multiple husbands, and a man could have multiple wives. You may not know who your birth father is, but you know your birth mother and her mother. So, the maternal grandmother rules. She even names all children. A child is named by destiny at the moment you are born. You cannot change your name, as it would be disrespectful.”

The Hawaiians remain a highly spiritual people. In an earlier article, I mentioned seeing a prominent, double peak on the northern shore of Kaua’i as our ship approached the island. This is part of the Kalalea Mountain range near the town of Anahola. 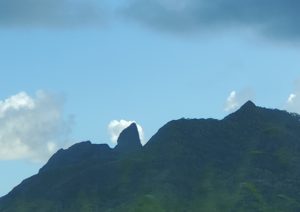 As these mountains stretch toward the Pacific Ocean, one particular “spike” stands out. The wider one is Hokuyalele Peak, and the skinny spike is Mono Mt.

It appears like a shark fin, and the word mono means shark. The gap or space between the mountains was actually a lava tube, worn away by thousands of years of erosion. 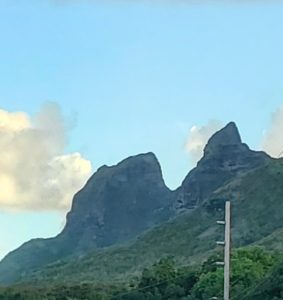 Together, the two peaks form the entry point for all souls coming to the earth. Is this local legend, faith, or folly? A great many people still hold fast to the belief that it is here in these Anahola Mountains where all souls enter the earth. Visiting in 1994, the Dalai Lama agreed with the strong spiritual connection that this “hole in the mountain,” called a Puuanakoua, is where souls enter the earth.

On the spiritual note, March 30, 1820, is noted as the date that Protestant missionaries from the northeastern U.S. first arrived on the Big Island, the eastern most island. 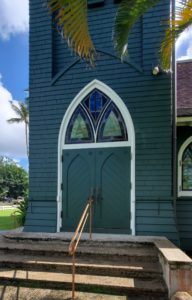 On the western end of the archipelago, The town of Hanalei still has one of the very earliest Hawaiian churches. 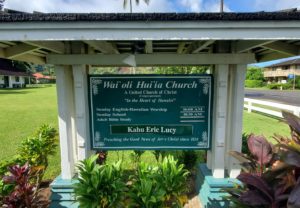 Wai oli Hui’ia Church has been holding regular services since 1834 in both English and Hawaiian. 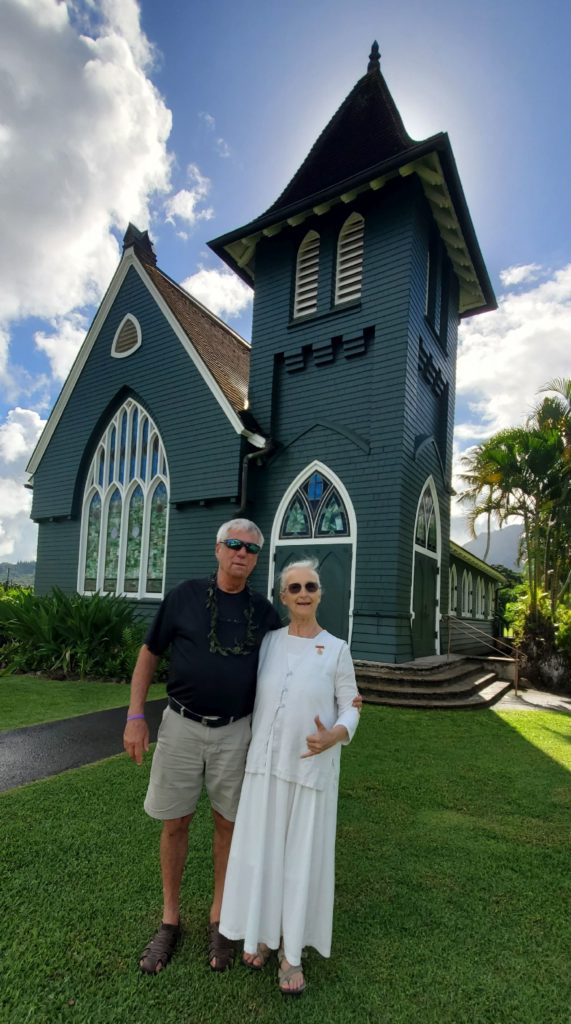 Hubby Ron and my sister, Deborah by the church

Author of 20+ books, and counting! A professional voice-over artist, dedicated foodie, and lifelong corporate communications geek, Cathy Burnham Martin has enjoyed a highly eclectic career, ranging from the arts and journalism to finance, telecommunications, and publishing. Along with her husband, Ron Martin, she has passions for entertaining, gardening, volunteering, active and visual arts, GREAT food, and traveling. Cathy often says, "I believe that we all should live with as much contagious enthusiasm as possible... Whether we're with friends or family, taking people along for the ride is more than half the fun."
View all posts by Cathy Burnham Martin →
This entry was posted in Family -- Says It All, Taste Bud Travels, Uncategorized. Bookmark the permalink.