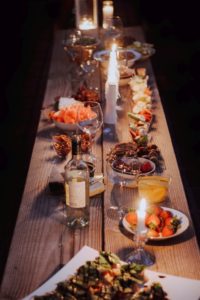 One of the most influential voices in the 19th Century was born in Newport, New Hampshire in 1788. Sarah Josepha Hale was born to parents who believed in education for both boys and girls, so she was encouraged to study and then became a writer. After only 9 years of marriage, her husband passed away, leaving her with 5 children. Relying on poetry for income, she wrote the famous nursery rhyme “Mary Had a Little Lamb.” Hale moved to Boston, Massachusetts, where she became the editor of the leading women’s publication of the day, Godey’s Lady’s Book in 1837.

In 1846, she started petitioning the President of the United States and other leading politicians to create Thanksgiving as an annual American holiday. Largely ignored, finally, in the midst of the Civil War, it was President Abraham Lincoln who was moved into action by her letter in 1863. Thus, at long last, an annual celebration of Thanksgiving and Praise was established.

Remaining a strong voice, she worked hard to get the Bunker Hill Monument completed, among other accomplishments. Hale retired in 1877 and died two years later at the age of 92.

Many thanks to Sarah Josepha Hale… and Happy Thanksgiving to all.

Author of 20+ books, and counting! A professional voice-over artist, dedicated foodie, and lifelong corporate communications geek, Cathy Burnham Martin has enjoyed a highly eclectic career, ranging from the arts and journalism to finance, telecommunications, and publishing. Along with her husband, Ron Martin, she has passions for entertaining, gardening, volunteering, active and visual arts, GREAT food, and traveling. Cathy often says, "I believe that we all should live with as much contagious enthusiasm as possible... Whether we're with friends or family, taking people along for the ride is more than half the fun."
View all posts by Cathy Burnham Martin →
This entry was posted in Family -- Says It All, Notable Quotables. Bookmark the permalink.