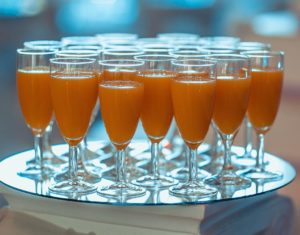 This is a day to celebrate brunch’s favorite adult beverage… a simple drink made from equal parts of champagne and orange juice. While variations abound, it was named “Mimosa” as the color closely resembles the flowers of the plant bearing the same name. I liked a Mimosa… UNTIL I tasted Italy’s counterpart.

In theory, sparkling white wine can only be called Champagne if it comes from the Champagne region of France. Italy’s delightful counterpart is called Prosecco.

If a true Bellini has not floated blissfully across your tastebuds, it may be a great day to give it a go. The Bellini has become vogue in U.S. restaurants and bars over the past couple of decades. You can find dozens of recipes online, too. However, not all bartenders, nor recipes, are created equal. As with the Mimosa, gazillions of variations appear everywhere. While virtually all include Prosecco, many basic recipes include peach juice (or a vast array of other juices), lemon juice, sugar, and even simple syrup. I have been served a crystal-clear cocktail as a Bellini, but only in the U.S. That simple bar version uses Champagne and Peachtree liquor. Don’t do that and think that you have tasted a Bellini. In truth, if Champagne is used, rather than Prosecco, the cocktail is called a Bellini Royal. Let me step back a bit. 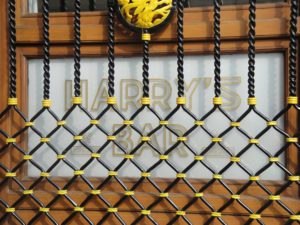 The Bellini was created in 1948 by Giuseppe Cipriani at the famous 1930s haunt known as Harry’s Bar in Venice, Italy. He named the drink for Venice’s Renaissance artist, Giovanni Bellini. The cocktail’s recipe is a simple combination of 2-parts Prosecco Spumante and 1-part white peach puree. (“Back in the day” one full-time employee’s sole task was pureeing the white peaches!) Plus, they add one SECRET ingredient: a touch of raspberry puree (sans seeds). This imparts a luscious rosy glow to the cocktail AND balances out what can be varying degrees of sweetness in the peaches. (In a pinch, my Super Simple substitute for raspberry puree is a tablespoon of raspberry sorbet.) The Bellini at Harry’s Bar became a favorite cocktail of many celebrities, including American novelist Ernest Hemingway.

While historically elegant, there is nothing fancy about Harry’s Bar in Venice. And the straight, almost water-glass style of the glass in which they serve a Bellini parallels the bar’s no-nonsense style. (But the prices of everything there are outrageously high… and that was true well before Covid!) Cipriani also created Carpaccio in 1950 to suit the dietary needs of an Italian countess who was not eating cooked meat. Cipriani cut a beef fillet into paper-thin slices and drizzled his special sauce (mayo, Worcestershire, lemon, milk, salt & pepper) abstractly over the slices. He named the creation Carpaccio in honor of the Venetian painter, Vittore Carpaccio. Let me share one other historic tidbit with you….  Just before World War II began, Giuseppe Cipriani became upset by the fascist regime’s Racial Laws, requiring restaurants to post a sign prohibiting Jewish people from entering. In protest, he boldly posted the sign outside the kitchen door, rather than at the front. Reacting with wrath to the insult, Harry’s Bar was seized for the exclusive use of the military. Rather than being forced to serve them, Cipriani and his staff walked away… and carried on Harry’s Bar (unofficially) in a farmhouse. (Sounds rather like an Italian Speakeasy!)

Love the history; love the true Bellini. On my first trip to Italy, I knew I was not going to miss out on getting to Harry’s Bar. We did and enjoyed a Bellini, of course! Now we make and serve them regularly… in stemware and even flowing from a fountain! Thank you, Venice & Harry’s Bar!

Author of 20+ books, and counting! A professional voice-over artist, dedicated foodie, and lifelong corporate communications geek, Cathy Burnham Martin has enjoyed a highly eclectic career, ranging from the arts and journalism to finance, telecommunications, and publishing. Along with her husband, Ron Martin, she has passions for entertaining, gardening, volunteering, active and visual arts, GREAT food, and traveling. Cathy often says, "I believe that we all should live with as much contagious enthusiasm as possible... Whether we're with friends or family, taking people along for the ride is more than half the fun."
View all posts by Cathy Burnham Martin →
This entry was posted in Bubbly Makes the World Go 'Round, Taste Bud Travels. Bookmark the permalink.