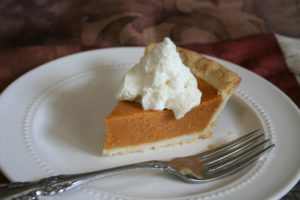 As Americans prepare for a traditional Thanksgiving meal, a pumpkin pie is frequently on the menu. Pumpkins were first cultivated in Central America around 5500 B.C. and were one of the first foods that European explorers took home from the New World. Their first mention in Europe dates back to 1536, but within a few decades, they were grown regularly in England, where they were called “pumpions” after the French word “pompon,” referring to their round shape.

Sometimes early pumpkin pie recipes were seasoned to be savory, with herbs such as marjoram or thyme. Others were sweet with sugar and cinnamon. I was utterly spoiled as a child by Mom, who had become a master baker, with the finest pie crust I have ever consumed to this day. She upped her pumpkin pie game with a Pumpkin Chiffon Pie that is awesome and made me never order nor make a regular pumpkin pie again.

This is how Mom made her classic autumn pie. In her light, flaky, homemade pastry shell, it was melt-in-your-mouth perfection. She always covered the pie with a thick layer of freshly whipped cream and sprinkled chopped pecans over the top. (My apologies that the photo is not her actual pie.)

Author of 20+ books, and counting! A professional voice-over artist, dedicated foodie, and lifelong corporate communications geek, Cathy Burnham Martin has enjoyed a highly eclectic career, ranging from the arts and journalism to finance, telecommunications, and publishing. Along with her husband, Ron Martin, she has passions for entertaining, gardening, volunteering, active and visual arts, GREAT food, and traveling. Cathy often says, "I believe that we all should live with as much contagious enthusiasm as possible... Whether we're with friends or family, taking people along for the ride is more than half the fun."
View all posts by Cathy Burnham Martin →
This entry was posted in Family -- Says It All, Incredible Edibles. Bookmark the permalink.