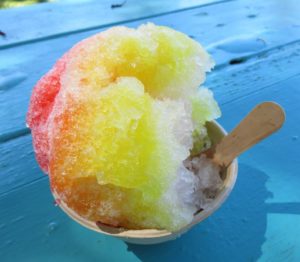 Sundae makes Fun Day on each and every day you choose. But must “I scream; you scream; we all scream for ice cream” necessitate traditional ice cream in that sundae? I used to think so. But now I’ve been introduced to Hawaiian shave ice, and just wait until you have it as a sundae!!!

Trust me when I say that shave ice is NOTHING like a snow cone. The more familiar icy mainland treat could never work as a sundae. It truly is just finely crushed ice in a paper cone into which a fun, but “fakey”-flavored syrup is poured. No snow cone can hold a candle to even a commercial Hawaiian shave ice. If you’ve been to Hawaii and indulged in the classic frozen treat, you know exactly what I mean.

Shave ice is such a thinly shaved ice that the powder-like texture truly feels like fresh snow. (Only those of us who’ve lived in snow belts know the plainly naturally fun of munching on freshly fallen snow.) Like snow, the fine shavings also more readily “absorb” the flavored syrups. If the differences stopped there, it would be enough. But NOOOOO!

The best Hawaiian have ice vendors now pride themselves on their made-in-house syrups, many adding no artificial sweeteners, flavors, nor colors. The quintessential first-timer’s shave ice experience features a rainbow of colors and flavors in a nicely mounded bowl. Two of the standards in the rainbow will be strawberry and banana, and not just food coloring and sugar. Further, most shops offer between two and four dozen single flavors. These do not mean just the familiar cherry, grape, lemon-lime, and blue raspberry sugar syrups either. (You know, our traditionally beloved snow cone “flavors.”) 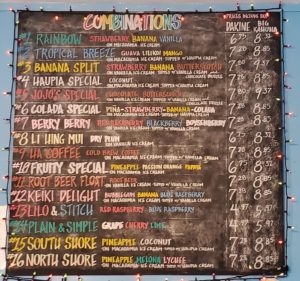 But we need not just enjoy our Hawaiian shave ice as it is. They traditionally top these delicious, snowy sundaes with a drizzle of something sweet. At commercial shops, it’s apt to be a bit of sweetened condensed milk, which makes the shave ice a Kakingori. At the shops and trucks that feature Hawaiian-grown or Hawaii-made ingredients, you may find a topping to be a “honey-thick” passion fruit cream called liliko. 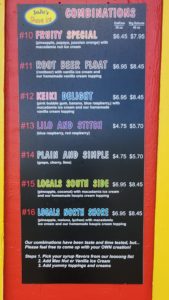 Now, in light of this being National Sundae Day, let me take you to the true “Aloha in a Bowl.” THIS is how Hawaiian locals do shave ice. 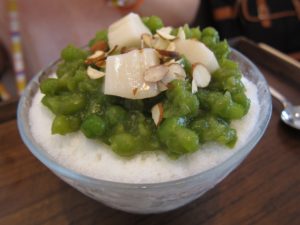 You first scoop locally made vanilla, macadamia nut, or coconut ice cream into your bowl. Pile the shave ice on top. Then a favorite house-made syrup is generously poured over the ice, followed by a drizzle of Haupia. (This is basically a cream pudding made from freshly grated coconut, cornstarch, sugar, and water.) You can even dash fun bits on top… from chunks of fruit, like papaya or kiwi, or a sprinkle of fresh or roasted coconut flakes.

One that I especially “wild,” because it stood out as a total news flash to me is called “Li hing,” which I mentioned earlier. This is a red powder made from ground plum skin, combined with licorice, red food coloring, and salt. While a taste for Li hing is an acquired one, I am told it’s a special treat.

We first learned about it in Honolulu on the island of Oahu. Since the early plantation days in Hawaii and the powerful influence of early Portuguese ranchers throughout Hawaii, Portuguese sausage has remained extremely common and popular. The same goes for malasada. In 1952, Leonard’s Bakery in Honolulu became the first bakery to make the Portuguese donuts, and the shop still gets lines of daily customers! These delightful dough balls are deep-fried and then rolled in sugars of many colors. The best ones are also filled with coconut cream. AND you can sometimes find them sprinkled with red powder. Yup! Li thing.

Whether you opt for that on your donut or sundae is purely personal. Li hing is not used on most servings. Then again, neither is seaweed, but you can get it on your shave ice in certain places. What!!!???! 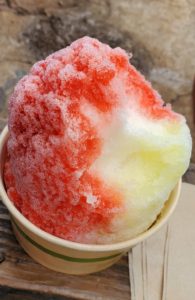 Author of 20+ books, and counting! A professional voice-over artist, dedicated foodie, and lifelong corporate communications geek, Cathy Burnham Martin has enjoyed a highly eclectic career, ranging from the arts and journalism to finance, telecommunications, and publishing. Along with her husband, Ron Martin, she has passions for entertaining, gardening, volunteering, active and visual arts, GREAT food, and traveling. Cathy often says, "I believe that we all should live with as much contagious enthusiasm as possible... Whether we're with friends or family, taking people along for the ride is more than half the fun."
View all posts by Cathy Burnham Martin →
This entry was posted in Incredible Edibles, Taste Bud Travels. Bookmark the permalink.