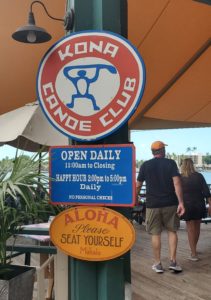 Before we can enjoy Happy Hour, we must dance our way through several other hours first. Let me begin with a little Big Island info.

Of the 13 distinct climates found on Earth, 11 are right here on the Big Island. No arctic glaciers nor desert sand dunes exist here, but you could ski in the morning and sit under a tropical palm tree on the beach in the afternoon. The population has grown from 185,000 to 200,000 since the Covid pandemic. That also drove home prices crazy, just as it did elsewhere. On the rainy side of the Big Island, the median home price in Hilo of $375K jumped to 600K. In Kona, a small home now runs between $800K and one million dollars. Eek. 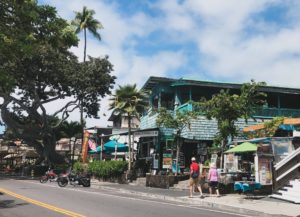 Our second day on the Big Island was spent in Kona, on the west side of the island. We had a Zodiac Boat adventure. This was a rollicking excursion. Our inflatable Zodiac could handle 17 guests, but we had just 7. Perfect!

We cruised the Kona coastline for 17 miles to our snorkel site… a “no fishing” bay filled with superb coral and massive schools of colorful fish!!! It is amazing when Yellow Tangs, for example, are schooled together in such numbers that they boldly color the water… yellow in this case.

On the shore stands a statue in tribute to Captain Cook. This is the site where he had come ashore and initially thought to be a god. This is also where he died as the people no longer viewed him as a god. Further, and there are conflicting stories on this, he got upset about the people borrowing the long boat they had given to him. When he challenged them, they killed him. Or it is said that when he challenged them in his conversation with the King or Chief, Cook touched his arm, which is forbidden, so they killed him… OR stabbed him… or not…. He may have tried to swim back to his ship, but since he could not swim, he drowned. Regardless, they burned the flesh from his bones in the honoring method used for chiefs and kings… and then buried his bones in a secret place.

(This was the standard method for high-ranking leaders, so that no one could steal the powers of his spirit.) The secret places were always lava tubes in steep walls along the coastline.

In addition to learning culture, history, and lore, we also enjoyed Parrot Cove, where dozens of green parrots now nest on the steep walls. 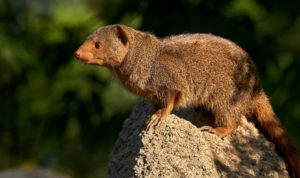 No mongoose can attack their nests and eggs here, so it is wise. The mongoose was brought to the Hawaiian Islands to rid them of rats. However, since mongoose like daylight, and rats are creatures of the night, all they got was more trouble. The mongoose love to dine on bird eggs, which is leading various species down the path to extinction. Fortunately for the island of Kauai, a mongoose bit the handler when he was bringing the crate from the boat. He was ticked off and threw the crate of mongoose into the ocean, drowning them all. Inadvertently, he thus protected the birds on that island.

We learned that only two mammals are “endemic” to Hawaii, thus found nowhere else. Monk seals and teeny tiny bats, barely the size of mice. However, these bats do not like the many captivating caves along this ragged coastline. Because bats are blind, they rely on sound to fly. They do not like the caves on the Big Island because lava has no echo!

Other caves and bays are known for where manna rays feed at night to where bones of ancient kings were buried. Every turn was eye-opening. 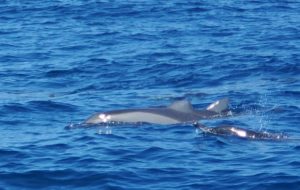 We were also blessed by large pods of dolphins. 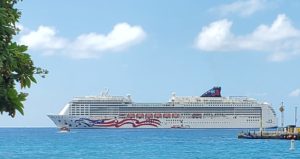 Then it was time for Happy Hour, so should we return to our ship? Later. 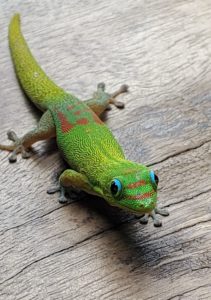 Instead, we hung loose with the locals. This included a splendid little gang of geckos. 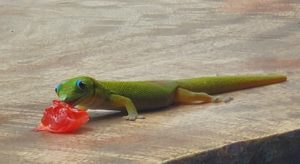 Yes, they like a maraschino cherry with their piña colada… or just the cherry. 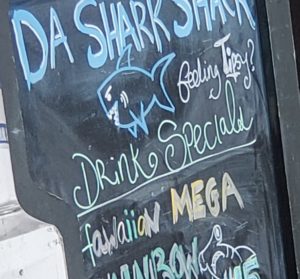 What fun we had at Da Shark Shack. I mean, it was “Sharktober,” after all, and even sharks are protected here. 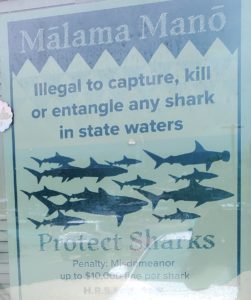