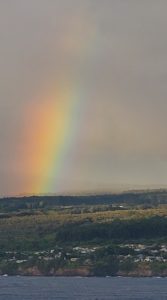 Being greeted by a rainbow as we cruised into the harbor, we knew we were in for a great day. And a wonderful new adventure!

The Big Island is home to Kilauea, the world’s most active volcano. Simply having to go there, we began our adventure in nearby Hilo. Visitors only come here to see the volcanoes, and for pretty good reason. Hilo gets 12 feet of rain per year. Yikes!

It’s also known as the Tsunami capital of the world, with the last 3 major ones claiming lives and wiping out much of Hilo in 1946, 1960, and 1975. No wonder there are just 3 hotels in this quaint little city. And where buildings formerly stood near the water’s edge, are now a great many beautiful parks. 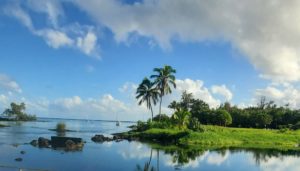 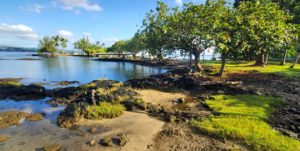 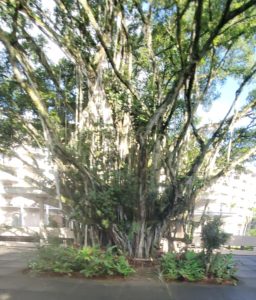 It was suggested that Banyan trees could withstand tsunamis. Thanks to a “celebrity” program, Banyan trees began to be planted in what became known as Banyan Drive. From Presidents Franklin Roosevelt and Richard Nixon to Amelia Earhart, Cecile B. DeMille, Arthur Godfrey, Louis Armstrong, Babe Ruth, and more, Hilo’s Walk of Fame grew and still flourishes with more than 50 trees.

Thanks to Kilauea, many other endemic- to-Hawaii plants and trees flourish on this island. One of those is perhaps Hawaiʻi’s most iconic tree, the “ohi’a lehua.” Found only in the Hawaiian Islands, they are noted for their gorgeous, fluffy flowers. We were fortunate to still find some still clinging to fiery red puffs! I can only imagine how it looks when the entire tree is covered with these flowers.

Also, while driving to Volcanoes National Park, I learned a lot about volcanoes. Plates in the earth’s surface are constantly moving, but the “hot spots” underneath them remain, erupting in volcanoes, such as the 137 Hawaiian Islands (many of which are now underwater) that cover 2,000 miles, stretching all the way to Midway. Geologists tell us that the Hawaiian Islands are moving west, away from the hotpot, at a rate of 4” per year. This decreases the likelihood of lava flows in most of the islands. Also, in theory, this means the Hawaiian Islands will reach Japan in some 6,000 years.

With the time it takes for volcanoes on the ocean’s floor to form new land, and with the fact that the earth’s plates are still moving, the islands’ ages differ. The eldest are the furthest west. Thus, Kaua’i is the oldest Hawaiian island at 5 million years old, followed by Oahu, which is between 3- and 4 million years old, then Moloki at 2 million, Maui at 1 million, and finally the youngest, which is The Big Island. At a mere 750,000 years old, The Big Island is still forming thanks to Kilauea. This pewing volcano has been erupting continuously since January 3, 1983.

Currently, its crater measures 93 x 76 miles. I say “currently” with all deliberateness. Kilauea has added 200 million more acres off the national park as it has flowed into the ocean just since its last major eruption on September 29, 2021. Seriously, in barely 13 months. Prior to that, the primary crater was 400’ across and 200’ deep. It is now 4 times wider and 1600 feet deep.

Looking into the crater in daylight, the lava’s red color is masked by the thin black crust that forms on top. At night, however, the lava glows strongly through all the cracks and vents.

The famed Thurston Lava Tube is no longer accessible for tour busses because of the many sinkholes under the roads after so much lava flowed. Oh, a “lava tube” is formed by flowing lava. The fiery red part cools and turns black on the outside rather swiftly, but the hot lava continues its flow toward the sea inside. Once that eruption ceases, the outer black layer hardens into lava rock, leaving the path the lava followed empty. These lava tubes can be as small as a foot in diameter or so large that humans can easily walk inside. And they can continue for many miles.

“Fascinating” is how I describe standing on ground that we know will be gone with the next earthquake on the Big Island. So many fissures in the land are visible, it was rather disconcerting.

Steam constantly escapes through vents in the earth and lava rock for miles around. Seeing them and feeling their intense heat felt surreal.

And we could see burnt remains of a few structures around the crater’s edge.

While Kilauea is still erupting, it is not the world’s largest volcano. That honor belongs to another volcano, also on the Big Island, which remains at an elevated threat level to erupt again. While Mauna Loa is Earth’s largest volcano, Mars can boast of having the largest one in the solar system. Scientists say it’s the size of New Mexico. 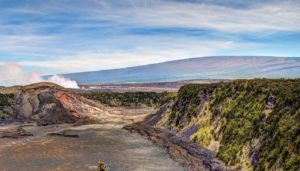 Author of 20+ books, and counting! A professional voice-over artist, dedicated foodie, and lifelong corporate communications geek, Cathy Burnham Martin has enjoyed a highly eclectic career, ranging from the arts and journalism to finance, telecommunications, and publishing. Along with her husband, Ron Martin, she has passions for entertaining, gardening, volunteering, active and visual arts, GREAT food, and traveling. Cathy often says, "I believe that we all should live with as much contagious enthusiasm as possible... Whether we're with friends or family, taking people along for the ride is more than half the fun."
View all posts by Cathy Burnham Martin →
This entry was posted in Notable Quotables, Taste Bud Travels, Write Again!. Bookmark the permalink.