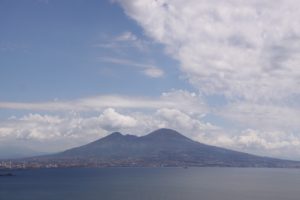 Each year, this day pays tribute to the most well-known eruption of one of history’s deadliest volcanoes, Mount Vesuvius, still active today. From August 24-25, 79 AD, the mountain violently spewed 1.5 million tons per second of molten rock and hot ash, obliterating the cities of Pompeii and Herculaneum and a couple of other surrounding villages in the Italian region of Campania just southeast of Naples. The event released 100,000 times the thermal energy of the atomic bombing tremors were common throughout the region, but the warnings of small earthquakes preceding the massive eruption had not been recognized.

Sir Ronald and I felt honored to tour Pompeii on our first visit to Italy. But, in all seriousness, in subsequent Italian travels, exploring still mostly buried city of Herculaneum was even more amazing. 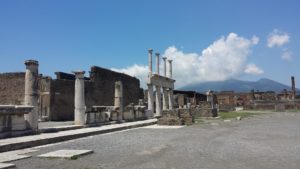 Though most citizens had evacuated, the Roman Empire city of Pompeii was buried under 19 feet of ash and other volcanic debris, which preserved it for centuries before the ancient ruins were discovered in the late 16th century. Buildings there dated back to the 4th century BC.

Herculaneum, an ancient city of Greek origin,  sat just 5 miles from the western base of Vesuvius, and the then luxurious seaside town was buried under 75 feet of molten lava. Centuries later the Naples suburb town of Ercolano (now with a population of 50,000) was unknowingly built on top of Herculaneum, the location of which had long been forgotten. That is until it was discovered by accident in the 18th century during the digging of a well. The first wall that was discovered turned out to be part of the stage of the Herculaneum theatre.

The National Museum of Naples contains amazing artifacts. Between those and the remains of the ancient cities, we get a time-capsule of Roman Empire life in 79 AD.