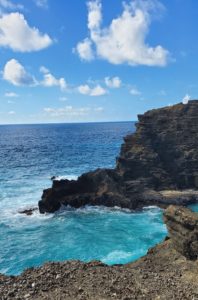 Sean O’Kane got it right! He recognized the classic spot on the North Shore near the Polynesian Cultural Center.

Ron and I spent just a couple of days on Oahu, before boarding a cruise ship. We stayed 3 nights on Waikiki Beach. 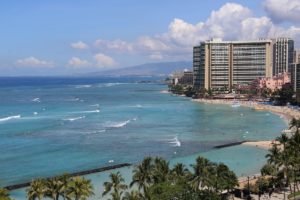 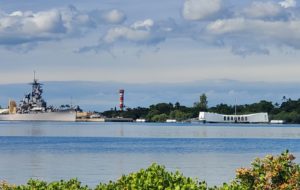 We wanted to visit Pearl Harbor and the USS Arizona Memorial, which we found to be extraordinarily moving. When the Japanese bombed Battleship Row and the airfield on December 7, 1941, they launched the United States into World War II. 1,177 sailors and Marines were killed on the USS Arizona alone, and the ship still lies on the bottom of Pearl Harbor and is the final resting place for more than 1,100 of those killed that day… and a number of survivors who later chose to have their ashes interred with their fallen shipmates. 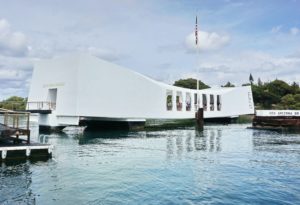 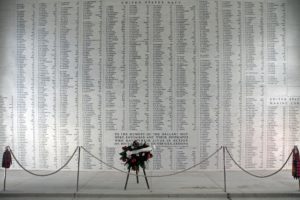 People often toss fresh flowers into the water as a tribute. Now and then a few drops of oil still escape from the sunken wreckage, rise to the surface, and then spread upon the water till gone. We got to witness this. 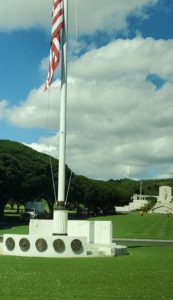 Then we visited the National Memorial Cemetery of the Pacific. The grounds are beautiful and meticulously maintained. Over 60,000 military service personnel are buried here. 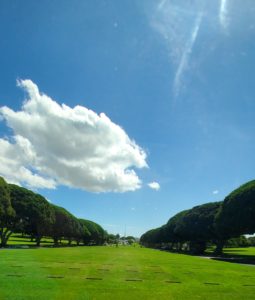 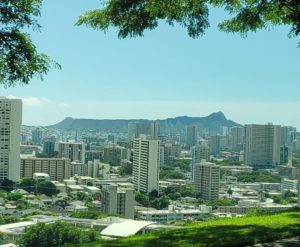 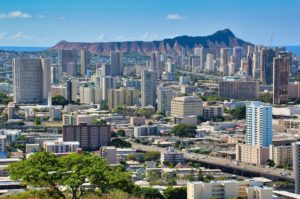 (PS… Honolulu only looks good from a distance.)

On our second day, Ron and I drove around Oahu, starting by heading east around Diamond Head. We drove through huge volcanic lava-formed mountains and oceanside cliffs.

Yes, the waters truly glow in turquoise blue, although my phone camera often failed to capture it well. 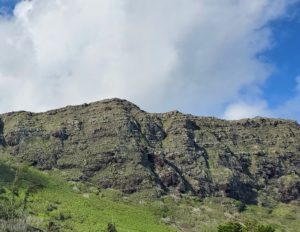 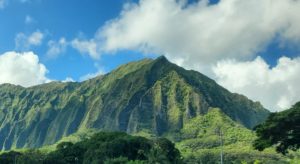 Looks rather “Jurassic Park,” I know. But just wait until we get to the actual island where they were all filmed. THAT is amazing!!! 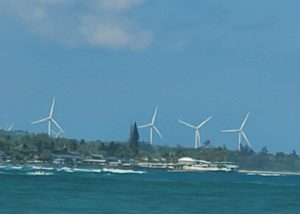 As we reached the north shore, we saw fields of huge windmills, capturing the trade winds to generate electricity. (Despite the many solar paneled buildings and solar panel farms and windmills, Hawaii has the dramatically highest electricity costs of anywhere in the USA.) Seeing the giant fields and rows of windmills looked very Stephen King’s “Langeliers.” 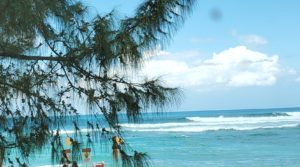 Though this is not the time of the famed high surf at Pipeline and Waimea Bay, we got to go there.

Being there was important for my former Surfer Dude, shown in a photo with Waikiki’s 9-foot bronze statue of Duke Paoa Kahanamoku, the Father of International Surfing. 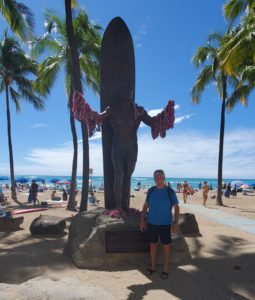 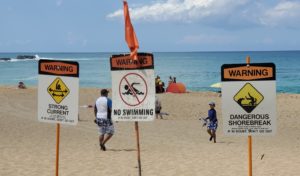 “Dangerous Surf Break” and “No Swimming” signs abounded. Waves were only 5-6 feet high, but they were higher on the outer edges, which are packed with rocks. These were NOT the huge 30-50’ surf that happens in January. 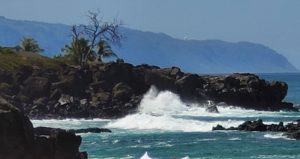 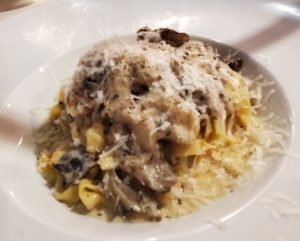 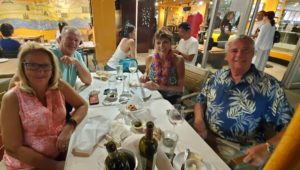 We dined there with our friends, Ken and Priscilla Rondeau, who were also cruising the Hawaiian Islands with us. I loved the tagliatelle with Italian prosciutto and mixed mushrooms with alfredo sauce. Oh, yes!!!! 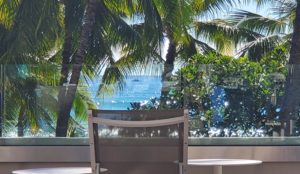 A new favorite of mine came with each morning’s breakfast. In addition to my fresh fruit, crème brûlée, and sticky bun, I loved fresh salad greens with papaya dressing. When in Hawaii… enjoy!

This is refreshingly delightful drizzled over spring greens or baby spinach!

Combine vinegar, honey, mustard, ginger, and salt in blender. With blades turning, then slowly drizzle in olive oil until the dressing is emulsified. Add papaya, seeds & pulp, and onion, pulsing till seeds are chopped. Refrigerate in a sealed container for up to 2 weeks.