On our cruise, we got to enjoy 2 days docked at the Kahului Port on the island of Maui, known as The Valley Island. Cruising into the harbor, I could easily see how the warm moisture from the Pacific Ocean is captured on the windward side of the island by the giant volcanic mountains. Thus, a lovely tropical rain shower is likely in some places, while the other side of that mountain stays dry.

I also find great interest in learning about cultures, whether in our own nation or traveling abroad. For example, while the battles of the ancient Hawaiian kings are legendary, each of the ruling chiefs of the islands of Hawai’i promoted peace and prosperity through unity. Once recreational grounds for Hawaiian royalty, areas on the island of Maui feature fine beaches, swimming, and snorkeling.

That’s how we spent our first day here. On one of Pacific Whales Eco-Adventures’ 65’ power catamarans out of Ma’alaea Harbor, we cruised 5 miles into the Pacific to Molokini, which is actually a steam release crater. It was formed during eruptions of the now dormant, great Haleakala volcano.

The Molokini Crater is a crescent-shaped islet known for its crystal-clear waters, abundant coral, colorful fish, and resting seabirds, including the Great Frigate, which still appears to be rather prehistoric.  As a protected conservation area, this volcanic crater is only accessible by boat with a certified tour operator. 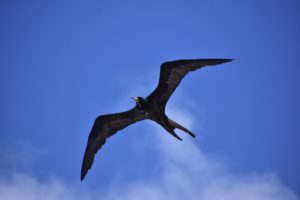 Molokini Crater is noted as one of the Top 10 snorkeling sites in the world. Many types of 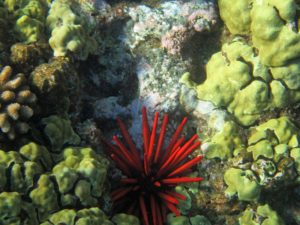 colorful fish and lots of bulbous coral live here. The coral is not too colorful, but it’s plentiful and healthy, along with black and red huge sea urchins and a couple of jellyfish.

My favorite fish at Molokini included the black triggerfish (black with a thin turquoise stripe). They are noted as the clean-up crew, munching on all the debris left by other fish. I also loved the royal blue fish which sported bright yellow tails and red fins, both top and bottom. 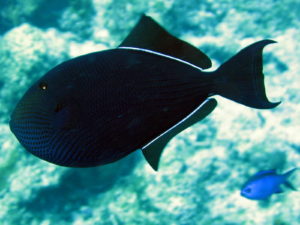 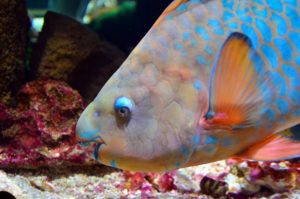 I learned that the large fish with shimmering aqua back halves and also many green scales with colorful adornments are rainbow fish and terminal red lip parrotfish. Each can produce 1 pound of sand per year!!! (This is from chomping on algae!) So, we can thank these beauties for the sandy beaches. 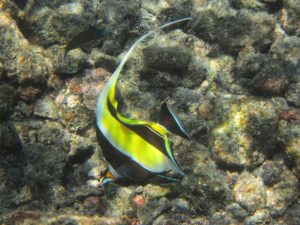 The Moorish Idols appear as black, white, and yellow angel fish, but the bright Yellow Tangs were even more radiant. We also saw trumpet fish and a yellow fish with black vertical stripes at the face and where the tail meets the body. We learned they are Milletseed Butterfly fish. 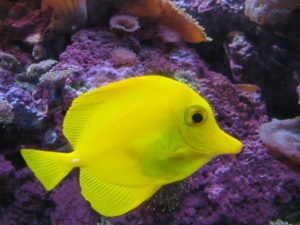 En route to our second site on the south side of Maui we first looped around the back side of Molokini. Here you can snorkel or dive along a 300-foot vertical drop straight down the outside wall of the crater. Yikes! As the island is about the size of a large ship, Molokini was used for serious target practice during WWII. The scars of battle still show.

During the Ice Age, the water line was much higher, and those ancient lines are still clear, as well as layers showing the results of various eruptions.  When the Pacific Whale Foundation’s Pac-Eco group takes swimmers here they call it ‘The Wild Side.’

We also saw something that we came to recognize as common in Hawaii…. Rows of windmills, generating electricity. I’ll share more on that in another post.

Our second site featured many caves in the dive area. The topography of this dive site was dramatically different, featuring a mostly sandy bottom into which a large and sudden protrusion of lava appeared, many feet high and filled with large crannies and caves.

And we watched out for sharks. We were there in late October, also dubbed as “Sharktober,” as they see so many sharks. Of the 40 shark species found around Hawaii, only about 10 are seen close to shore… including the hammerheads, various reef sharks, and tiger sharks. Great white sharks tend to only be seen between January and April when water temperatures drop below 75°F. We learned that when sharks die, their teeth become fossilized and turn black. If you buy white shark teeth, the shark was killed to get them. Eeek. Regardless, we were pleased to learn about sharks but not see any! 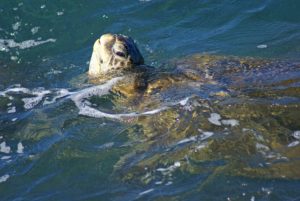 We did get to see the green sea turtles. We learned we must stay 10-15’ away from them as they are near-sighted, might not see us, and could accidentally bump into us. These sea turtles are important in Hawaiian culture, as many believe they are ancient ancestors. 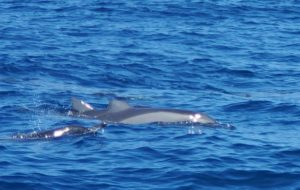 I also got “the sighting of the day,” as I spied the pod of spotted dolphins swimming toward our boat. Local law prohibits the tours from letting us get into the water with dolphins, but these dolphins came to us, and a few folks were still in the water.

Back in the port harbor of Kahului we saw a hydrofoil windsurfer. Yup, he “blew” past fellow windsurfers. We enjoyed a grand day that was barely the beginning of our Hawaiian Island adventures!