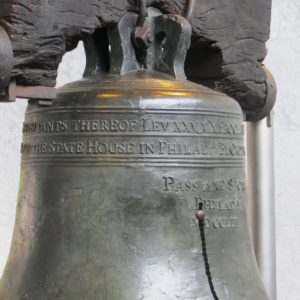 Two hundred and seventy years ago today… on September 1, 1752, the Liberty Bell arrived in Philadelphia. Ordered from the Whitechapel Foundry in London, it was originally the bell for the Pennsylvania State House, which is now called Independence Hall.

The bell cracked on its first test ring, so it was melted down and recast in Philadelphia. That is when it was inscribed with “Proclaim Liberty throughout All the Land unto All the Inhabitants thereof.”

Yes, it’s true. The bell cracked again in the 1830s. Efforts failed to repair the bell in 1846, and it has not been rung since.

The bell remains a national symbol of liberty. Freedom must never be allowed to be diminished to a mere “concept,” for once lost, nations fail to recover true freedom.

Author of 20+ books, and counting! A professional voice-over artist, dedicated foodie, and lifelong corporate communications geek, Cathy Burnham Martin has enjoyed a highly eclectic career, ranging from the arts and journalism to finance, telecommunications, and publishing. Along with her husband, Ron Martin, she has passions for entertaining, gardening, volunteering, active and visual arts, GREAT food, and traveling. Cathy often says, "I believe that we all should live with as much contagious enthusiasm as possible... Whether we're with friends or family, taking people along for the ride is more than half the fun."
View all posts by Cathy Burnham Martin →
This entry was posted in Notable Quotables, The Gripes of Cath. Bookmark the permalink.