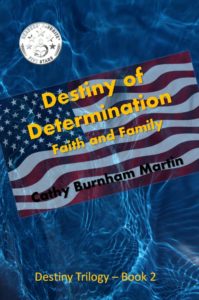 Quiet Thunder Publishing releases Book 2 in the Destiny Trilogy in just 2 months!! The paperback edition of Destiny of Determination: Faith and Family will sell for $15.99 and the digital edition for $5.99. But Amazon is offering a pre-sale on the digital edition for just $3.99. Anyone who orders one prior to November 2nd gets the discounted price as the book is released that day.

Instead of an excerpt from a chapter in the upcoming book, I thought it might be nice to share with you the book’s Introduction. While it is unlike the historical fiction’s chapters, it does provide worthy background information.

“Just when we think that, as a civilization, we humans might be evolving, we are confronted with yet another wave of forced refugees. Many cultures and countries have suffered this fate. In 2022, the terror featured Ukrainians, literally fleeing for their lives, just as my Armenian family did in attempts to escape the Ottoman Turks’ genocide against them and other Christians early in the 20th century.

“Armenians had lived peacefully in the shadow of the great Mount Ararat for thousands of years and under the rule of a variety of conquerors. When Armenia became the world’s first Christian nation, however, the Ottoman Turks’ ire remained stirred for generations.

“While the first book in this trilogy, Destiny of Dreams: Time Is Dear, focused largely on the suffering of Armenians trying to survive and escape death marches and outright massacres, it also reflected the importance of a family’s love and fortitude. Book one honestly and bluntly shared the brutality of a time in history when the once powerful Ottoman Empire was declining, but it is not essential to have read it before starting here with the second book.

“Destiny of Determination: Faith and Family continues my family’s story. And yes, it is a true story. My family’s true story. I write it for you as if you were sitting right beside me, and I was telling you the tale.

“Thankfully, unlike the first book, this one needs no warning about violent content. Not all struggles must hail from intrinsically evil places.

“Again, for privacy, I have changed the names of those still living among us, but I believe you will see and perhaps even feel the sincere reflections of our deep commitment to faith and family. Primarily, I hope you sense the positive power in a family’s struggle to move from immigration through discrimination on the road to freedom. America offered hopes and dreams to thousands of families, then trying to emerge from harsh political turmoil, religious persecution, economic chaos, and the ever-present threat of extermination.

“As a friend of mine often says, every inch of earth is conquered soil. With that in mind, I hope that you, dear reader, feel as proud of the refugees in your ancestry as I do of mine. They fought for survival and a chance for a better life for the likes of us. May their sacrifices continue to prove worthwhile.

“While language, religious, and cultural differences may initially feel dauntingly difficult to overcome, we can do it. From each group of refugees come new hopes and dreams, plus our next bounty of inventors, entrepreneurs, teachers, first responders, artists, leaders, parents, and much more.

Author of 20+ books, and counting! A professional voice-over artist, dedicated foodie, and lifelong corporate communications geek, Cathy Burnham Martin has enjoyed a highly eclectic career, ranging from the arts and journalism to finance, telecommunications, and publishing. Along with her husband, Ron Martin, she has passions for entertaining, gardening, volunteering, active and visual arts, GREAT food, and traveling. Cathy often says, "I believe that we all should live with as much contagious enthusiasm as possible... Whether we're with friends or family, taking people along for the ride is more than half the fun."
View all posts by Cathy Burnham Martin →
This entry was posted in Notable Quotables, Write Again!. Bookmark the permalink.