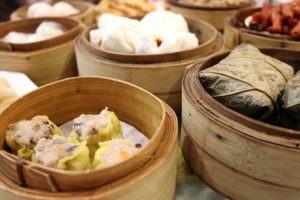 Pick a culture or pick a dumpling! In America, I must admit that our dumplings are pretty boring… typically baked filled pastry or pieces of dough added to a dish & usually boiled, as for soup. That likely harkens back to our founding fathers’ British heritage, where Suet Dumplings still reign. (Yes, they are made from flour and suet.)

Other nations have made dumplings an art form. Think of Spain and South America’s Empanadas, those savory fried dough pieces filled with anything from fish or beef to corn or chicken. Eastern Europe has several dumplings, like Kreplach, the thin flour and egg dough triangles, stuffed with meats or potatoes and served in soup. Or think of the baked or deep-fried Knish, a Jewish snack filled with mashed potatoes, sauerkraut or cheese. Of course, Poland’s Pierogi is iconic with its unleavened dough wrapped around potato, minced meat, cheese, or sauerkraut… or sometimes fruit, before being boiled and then pan-fried. Scandinavia has dumplings, too, like Sweden’s Kroppkaka. These are potato dumplings stuffed with bacon and onions, seasoned with allspice, and served with butter and a lingonberry sauce.

Call Italy’s versions pasta, but they also qualify as dumplings. Think of Gnocchi, the egg, potato, and flour dumplings served with butter, cheese or other sauces. Or go for tortellini, the tiny pasta pouches filled with anything from cheese and mushrooms to spinach and meat and served with sauces or in soup. Then there are the famed Ravioli, those melt-in-your-mouth past pockets filled with meat, cheese or veggies and served with a sauce.

Central Asia has a variety of dumplings, too. From my Armenian heritage come the Manti, a tiny little, open-topped, boat-shaped dumpling filled with spiced ground lamb (or beef) and served with a peppered, citrusy sumac-spiced yogurt sauce. These are traditionally served as crispy tapas bites or in soups. In book 1 (“Destiny of Dreams: Time Is Dear”) of the Destiny historical fiction series, these are revealed as my grandfather’s favorites at a lavish wedding reception at their house by Lake Van. At the back of book 2 (“Destiny of Determination: Faith and Family”), I share the complete recipe. (Yes, this is the book being released on November 2nd.)

When we think of dumplings, however, I believe most of us tend to think of the Far East. Wontons, be they fried or in soup, may well have been an early dumpling for many of us. China has several others, including Har Gow, a translucent “shrimp bonnet” served with dim sum. Southeast Asia is also known for the similar Shumai, an often open-topped dim sum dumpling filled with shrimp, chicken, or pork.

Each year, I like to learn to cook at least one thing that is completely new to me. Last winter I selected one of my favorite dumplings, the Japanese Gyoza. Masa, a restaurant in Manchester, New Hampshire, got me totally hooked. The dumpling is thinner and lighter than Chinese pot-stickers. Gyoza are traditionally filled with seasoned minced pork, cabbage, garlic, and ginger and served with a ponzu dipping sauce.

They take a bit of time to prepare from scratch, but they can be made ahead and frozen, so future servings are easy to cook up straight out of the freezer. 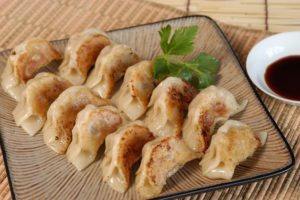 Combine pork, cabbage, mushrooms, onions, ginger, garlic, oil, tamari, cornstarch & white pepper thoroughly. Place 1 rounded teaspoon of filling in center of each wrapper. Moisten outer ¼” of wrapper edges with water and fold in half over filling, pleating and pressing the rounded edge 4-6 times to seal. (If making ahead, freeze or refrigerate in single layer in zip-top plastic bags.) To cook, place a few dumplings, flat-sides down, in a non-stick skillet (with 1-2 T neutral oil such as canola or vegetable, per batch) that is preheated over med-high heat. Let cook 2 min to just lightly brown bottoms. Add ¼ – 1/3 c water, cover, and cook over medium heat for about 3 min, till most of the water is gone. Remove lid and drizzle 1 tsp toasted sesame oil around the dumplings. Cook, uncovered until brown and crispy on the bottoms. Serve hot with ponzu or other favorite dumpling sauce. Makes 3 dozen.

Author of 20+ books, and counting! A professional voice-over artist, dedicated foodie, and lifelong corporate communications geek, Cathy Burnham Martin has enjoyed a highly eclectic career, ranging from the arts and journalism to finance, telecommunications, and publishing. Along with her husband, Ron Martin, she has passions for entertaining, gardening, volunteering, active and visual arts, GREAT food, and traveling. Cathy often says, "I believe that we all should live with as much contagious enthusiasm as possible... Whether we're with friends or family, taking people along for the ride is more than half the fun."
View all posts by Cathy Burnham Martin →
This entry was posted in Incredible Edibles, Taste Bud Travels. Bookmark the permalink.