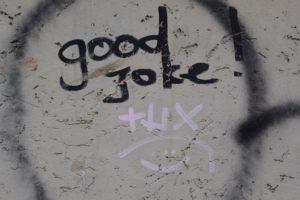 There are countless jokes told about every single U.S. President, but even Presidents can be funny, too.

As guests consumed a rather hearty amount of alcohol at the 1974 Radio and Television Correspondents’ Association dinner, Gerald Ford delivered a beauty. He said, “At a time when funds for the defense budget may be cut, it’s comforting to see some of the big guns in your industry still getting loaded.”

Our 4th President, James Madison, was known as a jokester right to the end, as evidenced by his quipping on his death bed, “I always talk better lying down.”

Known for straight talking, Harry S. Truman said, “My choice early in life was either to be a piano player in a  whorehouse or a politician. And to tell the truth, there’s hardly any difference.”

Naturally, there are plenty of speech writers working diligently to spin out great lines and timely “punny” bits to help the President wax eloquently, even when they need some humor. But President Ronald Reagan’s natural sense of humor was legendary. Even as they wheeled him into emergency surgery after the failed assassination attempt, he famously joked with the surgeons, saying, “Please tell me you’re Republicans.”

Enjoyed for his dry, self-deprecating style, President George H.W. Bush told the 1989 Gridiron Club dinner attendees, “I’m known for being indecisive, but I don’t know about that.”

President Barack Obama wrapped up his comments at the 2012 White House correspondents’ dinner with, “I have a lot more material prepared, but I have to get the Secret Service home in time for their new curfew.”

Author of 20+ books, and counting! A professional voice-over artist, dedicated foodie, and lifelong corporate communications geek, Cathy Burnham Martin has enjoyed a highly eclectic career, ranging from the arts and journalism to finance, telecommunications, and publishing. Along with her husband, Ron Martin, she has passions for entertaining, gardening, volunteering, active and visual arts, GREAT food, and traveling. Cathy often says, "I believe that we all should live with as much contagious enthusiasm as possible... Whether we're with friends or family, taking people along for the ride is more than half the fun."
View all posts by Cathy Burnham Martin →
This entry was posted in Notable Quotables, So Silly!. Bookmark the permalink.