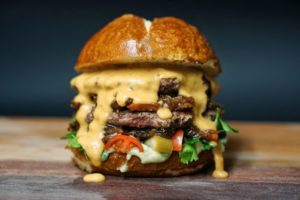 One legend says that this cheesy dish was first developed by Welsh peasants seeking a substitute for expensive meat. There are records of the dish in Wales dating back to the 1500s under the name “caws pobi,” meaning toasted cheese in Welsh. Likely it was a staple throughout Britain, and it remains popular in British pubs.

Dad, who was a bit Welsh by heritage, enjoyed anything with melty cheese. My brother, sister, and I grew up eating Welsh Rarebit (aka Welsh Rabbit) every other week as a light Sunday supper at our grandmother’s house, following a huge lunch. It’s a simple hot cheese sauce on toast… or toast points, or Saltine crackers, or toasted English muffins, waffles (or chaffles), etc.

The first recorded reference to the dish as Welsh Rabbit hails from 1725. This name is believed to started as a joke, as there has never been rabbit or any other meat included in the recipe. Welsh Rarebit still holds a special place in Wales as a traditional dish. I now have learned that September 3 is officially National Welsh Rarebit Day.

Grandmother Marjorie (Rowe) Gulumian faithfully made Welsh Rarebit for us in the top of a double boiler set over boiling water. She served it with a bowl containing ½ small onion and ¼ c fresh parsley, finely minced together, as a garnish. Her recipe simply melted 2 T butter in the top of the double boiler. In a small bowl, whisk together 2 egg yolks, ¾ c milk, 1 T Dijon mustard, and 1 tsp Worcestershire sauce. This mixture is then added to the butter. Once very hot, gradually stir in ¾ lb shredded Cheddar cheese (¼ lb at a time), stirring till smooth after each addition. Then cook and stir 5 more minutes, before serving, piping hot, over crackers, toast, biscuits, or English muffins.

My personal twists (as I updated her recipe) include preparing in a medium saucepan over low heat. To the seasonings, I also include 1/8 – ¼ tsp ground white pepper, and I double the Worcestershire sauce to 2 tsp. I also stir the minced onion and parsley into the sauce along with the cheese, and a garnish with a sprinkle of paprika. Shift paprika to cayenne pepper to add some “heat.” (Or stir in a few drops of Frank’s Red Hot Sauce into the cheese.)

A more traditional twist is to make this entirely with beer or ale in place of milk… or to replace at least ½ c of milk with beer. There are no rules. I have also done this replacing milk with white wine, rather than beer, and get lovely results, which I have used as a fondue to serve with crusty chunks of French bread, some just barely cooked veggies, such as broccoli florets, and fresh slices of apple.

Would you like a few more variations? Try serving Welsh Rarebit over halved baked potatoes and sprinkling with finely sliced green onions (green portion). Another yummy variation is to stir in 1-2 c finely diced fresh or canned tomatoes along with the cheese; serve garnished with chopped flat-leaf parsley and crumbles of crispy bacon. Turn this into Welsh Rarebit Crab Dip by stirring in 2 cans drained crabmeat and 1/3 c finely chopped green onions; serve with tortilla chips or buttery crackers like Ritz.

Or go crazy by turning this into Welsh Rarebit Burgers, as in the photograph. Place your grilled burger patties (yeahhhhh…. 1, 2, or even 3) on a toasted bun bottom amidst your choice of tomatoes, pickles, caramelized onions, and 2 strips of crispy bacon, before pour your cheese sauce over it all… and then maybe even adding a sprinkle of packaged crispy onions, jalapeños, or red peppers, if desired. Hey! I didn’t say that this would be either low-calorie or neat & tidy to eat. LOL

Author of 20+ books, and counting! A professional voice-over artist, dedicated foodie, and lifelong corporate communications geek, Cathy Burnham Martin has enjoyed a highly eclectic career, ranging from the arts and journalism to finance, telecommunications, and publishing. Along with her husband, Ron Martin, she has passions for entertaining, gardening, volunteering, active and visual arts, GREAT food, and traveling. Cathy often says, "I believe that we all should live with as much contagious enthusiasm as possible... Whether we're with friends or family, taking people along for the ride is more than half the fun."
View all posts by Cathy Burnham Martin →
This entry was posted in Family -- Says It All, Incredible Edibles, Super Simple Is Key!, Taste Bud Travels. Bookmark the permalink.