Cruising toward Kauai, our final island on our Hawaiian tour, I spied where the Kalalea Mountain range stretches to the sea in the northeastern portion of the island.

I later learned that the two jagged peaks at the very end are revered by locals as the place where all of our spirits enter this planet.

And suddenly, there was my sister, Deborah, waving both arms from the lighthouse as we entered the Nawiliwili Harbor. Tears flowed down my cheeks the entire time as we sailed into the harbor.

My sister has lived on the island of Kauai for 22 years. FINALLY, we got there to visit her Paradise for the first time.

She knew we had a full island tour, but she also knew the first stop that we would make, so she met us at the Wailua River State Park. 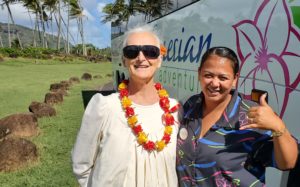 Deborah enjoyed meeting our guide, Kana’e, who is half Hawaiian native and taught us a great deal about the culture.

Displaying the true essence of my highly spiritual sister, Deborah offered a blessing at the sacred site there known as Hikinaakala Heiau. Since the 14th century and until the traditional Hawaiian religion was abolished in 1819, this was the political and religious center of Kaua’i.

In ancient times, a heiau was a place of royalty, yes… but also refuge. This was a pu’uhonua or place of refuge.  In times of war or turmoil, if anyone in trouble could make it to the temple, they would be safe as long as they remained there.

The remains of the temple still call for great respect. Entering is even ka’pu or forbidden for non-natives.

Also at the State Park is the Lydgate Beach Park. A mighty undertow threatens swimmers at the mouth of the river and has carried many out to sea, including the Lydgate’s 2-year-old son. They wanted no other families to suffer their loss and had large lava boulders added around an enormous area by the beach, forming a natural, yet safe swimming and snorkeling area. The beach park was named in this family’s honor. 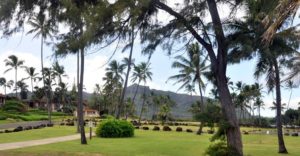 Leaving my sister for a while, we continued our tour of Paradise. 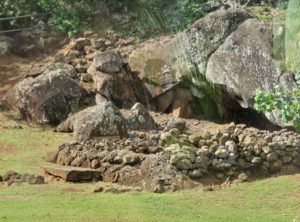 Nearby, my eye-opening cultural education continued. A large cluster of rocks featured a flat, square one in the front and center. Any princess or queen who was pregnant delivered her baby here in front of all to see, as they wanted the people to witness the birth of the next king or queen. Yes, they have medical centers now.

Further along, we learned that the 20-mile Wailua River is Hawaii’s most navigable river, as it flows from the 5,148-foot Mount Wai’ale’ale in the center of the island. Weaving through lush jungle landscapes, the river weaves through the settings of seven different ancient temples or heiaus. 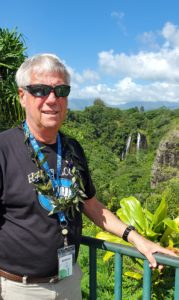 Among our stops was one for the famed Opaeka’a Falls, from the north branch of the Wailua River. Interestingly, Opaeka’a means “rolling shrimp,” which once were readily available in the stream. 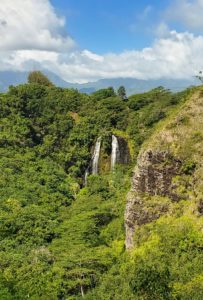 This 40-foot-wide waterfall drops 151 feet into a hidden pool. A lookout also offers a perfect peak into the Wailua River Valley.

En route to the Waimea Canyon, we drove down Tunnel Road, with its arching trees creating a beautiful tunnel effect. It is also known as the Tunnel of Love, as many couple choose to risk the 50 mph traffic to say their “I Do’s” under the tunnel. Go figure. 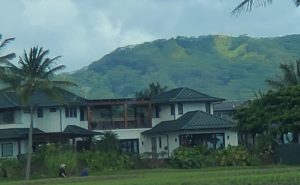 This is near one of Kauai’s stunning country clubs, including one where we saw the Hawaii home of famed NFL quarterback Drew Brees. There are many multi-million-dollar celebrity homes.

But as our guide pointed out, the $80,000 annual membership fees are mere “chump change” for them. 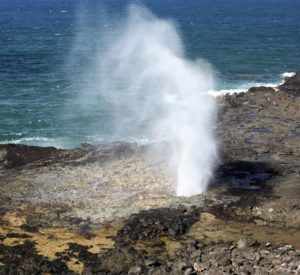 One phenomenon along the lava rock coast is something called blowholes. When large waves crash into the shore, the pressure pushes water straight up through a vertical lava tube hole, delivering a whale-like vertical blast of water. On Kauai’s south shore in the town of Koloa just after Po’ipu Beach, we visited a most spectacular one called the Spouting Horn. The surf crashing into the rocks forces the spout of water as high as 50 feet into the air, bringing smiles to all faces visiting this most highly photographed site. 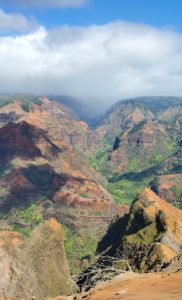 Then came the highlight of this day’s tour… Waimea Canyon. The word “Waimea” means “reddish waters.” When it rains, waters pull color from the red rocks as the river makes its way through the canyon to the sea. Colorful and lush with birds, plants, and wildlife, this is a must-see for any visitors to Kaua’i. Dubbed the Grand Canyon of the Pacific, it does not begin to equal the size of the one on the mainland.

This all acknowledged, the dramatic beauty of Waimea Canyon is staggering. Whether viewing from the various lookouts that are accessible by road or hiking the multitude of trails, its dramatic vibrancy remains unforgettable in all directions. 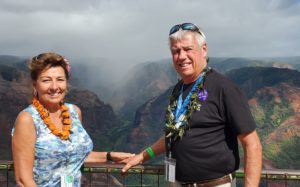 The weather was on our side. Only as we prepared to depart were the misty clouds forming down the side canyons. This happens daily by the trade winds picking up the warm ocean waters and getting caught up, forming clouds beside the high volcanic peaks. 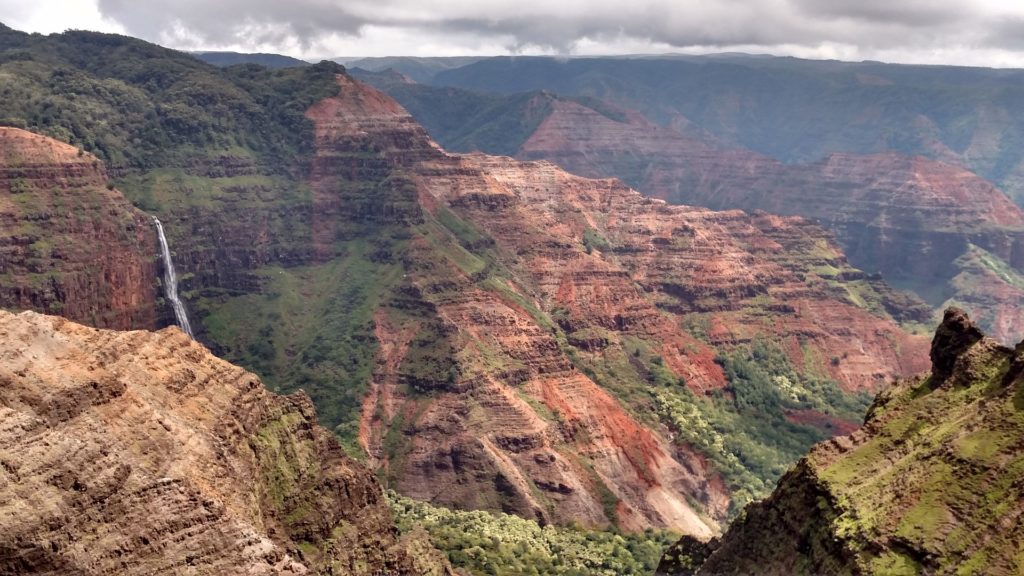 Serving up a stark contrast is a crazy little town on the southwest shore. A small village now, Hanapepe used to huge and was known as Party Town from WWI to the 1950’s. Then it was filled with bars, brothels, and US military personnel. Then Kauai closed all the bars and brothers, and they were replaced by a dozen churches. Due to its Friday night “Art Walk” event, Hanapepe is now known as Art Town. Not through with this day’s Hawaiian adventures, our next stop was some shave ice at Jo Jo’s in Hanalei. (Naturally!)

We were then off to the Luau Kalamaku at the historic Kilohana Plantation. The sounding of the conch shell signaled the Imu Ceremony for the unearthing of the roasted pig.

This was followed by what was dubbed a “scrumptious buffet” of local Hawaiian specialties. In truth, the food was sadly mundane, especially after we have enjoyed so many delightful local dishes. (It even made the cruise ship buffet look gourmet.)

However, the music and choreography made up for it. Through music and dance, the professional cast relayed the legends and lore of the first Polynesians finding their way to the Hawaiian Islands.

Such a day and evening… and our time on Kaua’i was just beginning! 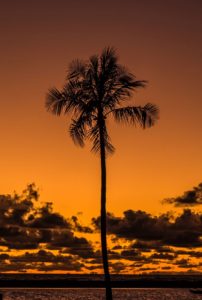 Author of 20+ books, and counting! A professional voice-over artist, dedicated foodie, and lifelong corporate communications geek, Cathy Burnham Martin has enjoyed a highly eclectic career, ranging from the arts and journalism to finance, telecommunications, and publishing. Along with her husband, Ron Martin, she has passions for entertaining, gardening, volunteering, active and visual arts, GREAT food, and traveling. Cathy often says, "I believe that we all should live with as much contagious enthusiasm as possible... Whether we're with friends or family, taking people along for the ride is more than half the fun."
View all posts by Cathy Burnham Martin →
This entry was posted in Family -- Says It All, Taste Bud Travels. Bookmark the permalink.