And Your Little Dog, Too! 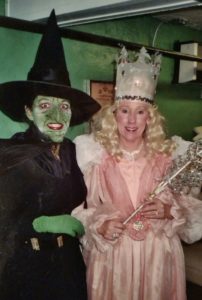 The classic film “Wizard of Oz” debuted in Hollywood, California on this date in 1939. It opened across the United States on August 25th. While she started as a fictional character in L. Frank Baum’s children’s novel, “The Wonderful Wizard of Oz” in 1900, it was actress Margaret Hamilton who breathed life into her in the film. Actress Gale Sondergaard was originally cast as the Wicked Witch of the West, but withdrew when the sly role turned sinister, the green glamour gown was replaced by black, and her skin would be green.

The character had terrified me greatly as a child. However, I also found Hamilton’s portrayal to inspire something I call a rather dark side of human nature. When she would come on the screen, I would cover my eyes with my hands. BUT, I would leave one little crack so I could peak. That translates into so many times in our human existence when we say that we can’t look! And yet, we also cannot quite look away.

As primarily a musical and comedy actress, I have been blessed to play all my favorite roles, and all my favorite “witches.” This includes good ones like the Fairy Godmother in “Cinderella” and nasty ones like Rosina Dainty Mouth (English translation) in the Engelbert Humperdinck (no, not the British singer) opera “Hansel and Gretel.”

When cast with one of the only 2 Equity contracts in Manchester’s Palace Theatre production in the 2000s, some actor friends were shocked. They thought I was “too nice” to play her in the Margaret Hamilton manner. No way! “I was born to play this role,” I recall telling them. As a Margaret Hamilton devotee, this was the one missing role from my repertoire.

I remember the director imploring, “Please tell me that you don’t get along with children or dogs.” Sorry, but I do. (Um…. That’s why they call it acting.) The children playing the munchkins made large, colorful paper flowers and decorated the walls of my dressing room with them. They also changed the name on my dressing room to read WWW, rather than Witch. On Opening Night, they added the words “and Toto, too.” The dog portraying Toto had no space in which to rest backstage, so I invited her owner to share my room.

(Ah, yes… the photo is backstage at The Palace, where we actresses playing the wicked one and the good one could be friends.)

Author of 20+ books, and counting! A professional voice-over artist, dedicated foodie, and lifelong corporate communications geek, Cathy Burnham Martin has enjoyed a highly eclectic career, ranging from the arts and journalism to finance, telecommunications, and publishing. Along with her husband, Ron Martin, she has passions for entertaining, gardening, volunteering, active and visual arts, GREAT food, and traveling. Cathy often says, "I believe that we all should live with as much contagious enthusiasm as possible... Whether we're with friends or family, taking people along for the ride is more than half the fun."
View all posts by Cathy Burnham Martin →
This entry was posted in Notable Quotables. Bookmark the permalink.